Five years since my adventure of building a GD started and three years since it was finished, this car has now been sold and was shipped to its new owner in Nottinghamshire today. The car was transported in a closed PRG trailer by Andrew at Zoom of Chester. Great service if you ever need your car moving and you don’t want to drive it.

The car can be seen later this year at the Newark car show in July 2021 and no doubt in the lanes around Nottingham. It maybe even have its new roof, air scoop and a few other modifications.

Labels: After the build, Non-build blogs

The counter has passed 130,000 page views for this blog. Thank you for visiting.

Not surprisingly the most viewings are from the UK, followed by Russia (!), USA, the UAE and Germany.

Cobra bound for a new home!

I have taken a deposit on this great car. Will be sorry to see it go, but things move on in life.

Hope Steve enjoys it as much as I have and that it will have a good home.

Labels: After the build

AK with lick of paint

The previous blog showed us putting the body on Terry’s car. Just look at it now - what a stunner!

Edit April 2021 - this car is now featured in the latest Complete Kit Car magazine, including on the front cover. 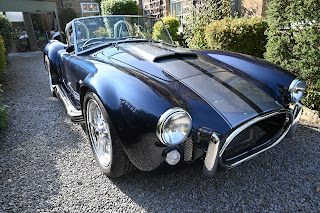 Went over to Terry’s in Pateley Bridge to help lift the body onto his AK chassis. James was driving (almost finished his AK), but a boat would have been better after the heavy rain - floods around Otley.

Anyway, with help from Stan we managed to get the body on, although it was touching the near side manifold when in place. So another phone call to Jon at AK and a further challenge on the build route for Terry!

The wind wings were left off and the mirrors were removed from the windscreen. The wind wing hinges were refitted to the windscreen.
5mm Perspex sheet was used for the side screens. This had guidelines drawn on it by GD - note that it says ‘guide only’. The cutting will depend on how you
have installed the hood, so the cut line WILL be different from the lines GD have drawn, unless you are very lucky.

The Perspex was cut, using a slow speed on the jig saw, replicating the screen rake angle, but allowing an extra 3mm clearance for the hood bow. The front edge of the side screen almost touched the windscreen frame. The bottom edge of the side screen was set about 13mm from the door top, to allow for the rubber seal - I used a piece of wood taped to the door to space the side screen from the door. The bottom rear part of the side screen was also cut to create a 13mm gap to the door at this stage. The side screen was temporally taped in place.
Holes were then drilled to mount the side screen to the hinges and these were temporarily secured in place to make sure that the cut was right. No seal was required between the side screen and windscreen.
Next the top stitching was used to help mark the top of the side screen, so that it could be tucked under the lip of the hood when closed. The factory markings on the Perspex were incorrect for my screen. So after numerous measurements and remarking, the cut was made. This was a time consuming job. An “S” transition was used at the top rear to create an overlap of roughly 70mm to the rear (screen to hood) to allow rain etc to be blown off to the rear.
The Perspex was removed and cut to shape. The side screen is flat, so does not follow the shape of the car - it sticks out a little at the bottom rear, but being Perspex there is some flexibility here. So it will need fixing at the rear to pull it into shape. This will also stop the side screens lifting when the hood is in place or when the screens are used without the hood.

GD recommend a turn catch that bolts through the side screen and turns behind the elbow of the hood frame, but this limits the side screen use to times when the hood is up! The bottom of the screen cannot be fixed to the door top, otherwise the door will not open (due to the windscreen angle). So I have yet to decide how to fix them - possibly a turn lock that goes behind to door top or some Velcro that goes from the side screen to the top underside of the doors.

The edges of the Perspex were sanded smooth, then polished with a fine body compound, before the rubber seal was worked into place on the bottom edge. Here I applied a little Vaseline to the rubber seal and then worked it into place. Patience and some strength is required here! Finally, clear anti-scratch film was applied both sides (inside and out), at the top of the side screen (tucked in edge only), to prevent scuffing when used. The screen was then refitted to the car. 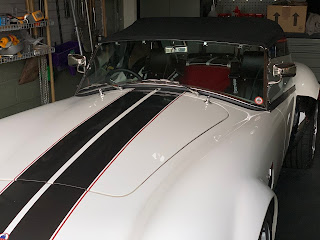 This process was then repeated on the other side of the car.

I decided to use ‘glove box’ locks for the side locks. A hole was cut in each side screen to the ‘across flats’ size of the lock barrel, then filed to a square to take the locking mechanism. This stops the lock turning in the sidescreen.

The side screen catches were next. First I removed the existing catch part and made up a longer catch from aluminium bar. This was cut so that 50mm was extending towards the door top and 65mm to the other side (115mm in total). Shrink wrap was applied to the longer side to act as the handle. A square hole was cut as the pivot 50mm from the short end, before attaching to the lock (see below).
Next the catch position was marked onto some masking tape on the top of each door. The slot size was marked from the escutcheon (I used the bulkhead escutcheons from GD) onto the tape and the screw positions marked. A slot was then cut with the Dremel. After filing out the slot a little, the masking tape was removed and the escutcheons fitted in place using two screws.
Finally the side screens were re-attached and the catch positions checked.

Labels: After the build, Body, Hood

The centre of the Tenax fastener holes were marked on the fabric where it fitted to the moulding. This was just above the dip between the boot and the rear wing on each side.

The hood fabric was carefully removed from the car. To finish off the hood, the fabric over lapping the hood bows was stuck in to the channel and surplus fabric trimmed off.
Holes were punched in the corners of hood fabric, where marked. Next I made up two tabs out of plastic, using a photo from Andy as a guide.  The screw thread of the spring cap parts of the Tenax fasteners were pushed through the tab and then the fabric. I tried to screw on the “nut” part with a Tenax fastener tool. Although the plastic was supplied by GD, I could not get the plastic and hood fabric between the two parts of the fastener as they were too thick, so this part was abandoned! The idea of the tab is to stop the piping curling up at the corners, so I will have to live with this risk. The Tenax fasteners were therefore fitted without the tabs.

The stud was fitted to the moulding. The nut that goes onto the stud behind the moulding was fiddly to attach to say the least!
The hood was refitted to the car. It was then that I noticed that the locating peg from the front off side screen bows had pulled out of the bow. So another job to refit it. (Note: Decided to buy a new bow from Europa rather than seek out a welder to fix it).

Job finally done - after three attempts at getting the tension right to get rid of the ridges in the fabric - had to pull the stuck fabric off the bow, remove the adhesive and then refit!

I was told that the first time the hood gets wet DO NOT put it down until it is dry, otherwise you will never get it back on. So I won’t risk it, but presumably it will help further tension the hood by getting it wet.

How to use this blog

This is a record of my Cobra sports car build. If you want to create a Cobra too, this step by step diary may help you or simply give you some advice on how to go about it.
The blog is not an official GD site and is not endorsed by them, nor does the blog indicate that I endorse the GD product in any way. It is simply a record of what I did.
If you are interested in the build process, then just look at the posts in chronological order. My blog shows the most recent posts first. Look out for the 'Older posts' link at the bottom of any page.
If you are interested in a specific area of the build e.g. brakes, then click on 'Brakes' under 'Build process' and you will just see stuff about the brakes. Do look at the "Things that went wrong" category to see lessons that I learned the hard way during the build. Where possible I have added a note to the relevant post too. Remember that the posts are shown with the newest first.
Should you want to see other people's builds, suppliers or other elements please just click on the appropriate link provided below.

Some other GD427 Cobra build blogs that may interest you

Advice on a build